Information of the geologic units and their water bearing properties within Rusk County is available in the District’s Management Plan located in District Documents of the District’s website.

Rusk County is located within the eastern portion of the Interior Coastal Plains sub province of the Gulf Coastal Plains physiographic province. The sub province is comprised of alternating sequences of unconsolidated sands and clays.  Erosion of the clay soils has resulted in terrain consisting of sand ridges that generally parallel the coast.  In East Texas, the sub province is characterized by pine and hardwood forests and numerous permanent streams. West and northwest of Rusk County, faults associated with salt domes are characteristic of the region.

Ecologically, Rusk County is situated in the South Central Plains ecoregion, which stretches across eastern Texas and into northwestern Louisiana and southwestern Arkansas.  In eastern Texas, this ecoregion is commonly referred to as the Piney Woods.  The Piney Woods region of eastern Texas is considered the western edge of the southern coniferous forest belt.  Areas that were once dominated by long-leaf pine (Pinus palustris) savannas, are now predominantly classified more as oak-hickory-pine forest.  Large areas have been converted to plantations of loblolly pine (Pinus taeda) and shortleaf pine (Pinus echinata) while some localized areas have been converted to agricultural pastureland.  In the northeastern portion of the county, surface mining for lignite has occurred in large areas of the Wilcox aquifer outcrop.  Upon completion of mining activities, the land is reclaimed with the intent to restore pre-existing conditions, including slope and vegetation.

Topographically, Rusk County is situated atop a drainage divide that separates the Sabine River drainage basin to the northeast and the Neches River drainage basin to the southwest.  The drainage divide generally follows a northwest-southeast trending ridge that extends through the interior of the county from just south of Overton and New London in the northwestern portion of the county to just north of Mt. Enterprise and the community of Caledonia in the southeastern portion of the county.

The majority of Rusk County, approximately 89 percent, is comprised of gently sloping to moderately steep rolling hills.  Soil types throughout this land are predominantly well drained with moderate permeability.  Approximately 11 percent of the county is located on nearly level flood plains with moderately slow permeable soils. 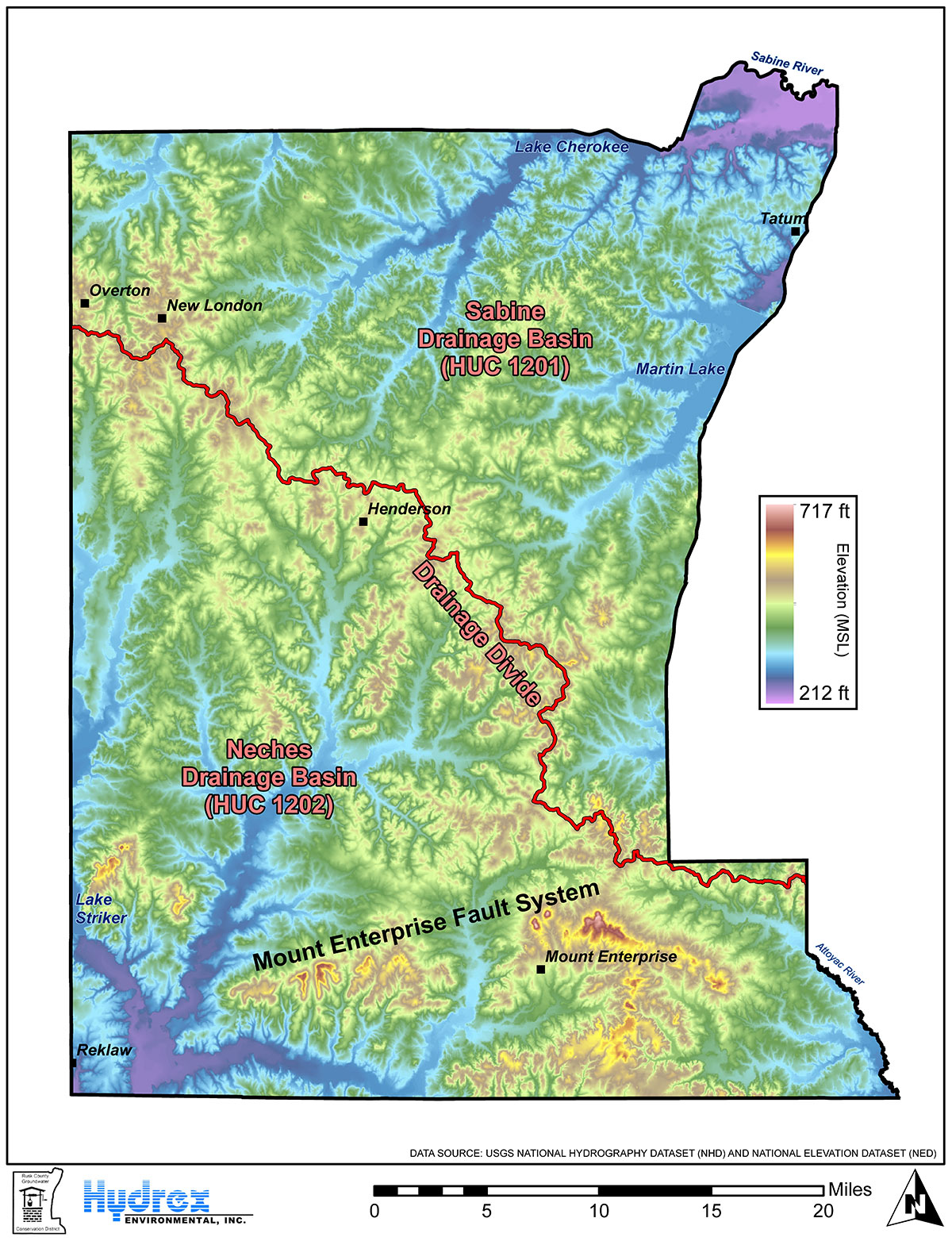 Rusk County lies between the Sabine Uplift on the east and the East Texas Basin on the west.  These two prominent structural features resulted from faulting that began in the Triassic Period (200 to 250 million years ago).   The axis of the East Texas Basin trends north to south generally along the western boundary of Smith County.  The Sabine Uplift, which centers in Panola County, Texas and northwestern Louisiana, forms the eastern boundary of the basin.  The development of the two complementary structural features (basin and uplift) contributed to the setting for some of the largest petroleum reservoirs in the world: the East Texas Oil Field and the Carthage Gas Field.

The Mt. Enterprise Fault System trends east-west across the southern part of Rusk County.  Movement along the fault system has been variable.  Some areas show a maximum vertical displacement of over 200 feet, with beds of the Queen City Sand downdropped against the Carrizo Sand.  Strata in northern and central Rusk County show a general dip away from the Sabine Uplift.  In the southern part of the county, the gradient increases and becomes more variable in close proximity to the Mt. Enterprise Fault System.

The geology of Rusk County, as it relates to fresh groundwater, is comprised of alternating sequences of continental, deltaic, and marine sediments that are predominantly of Eocene (33.9 to 56 million years ago) to Paleocene (56 to 66 million years ago) age.   Continental and deltaic units, composed of quartz sand with varying amounts of silt and clay, contain the fresh groundwater in the area and form the major conduits for its movement.  Marine portions of the section, consisting largely of clay or shale with lesser silt and glauconitic sandstone, form the intervening aquitards that restrict the movement of groundwater.

The Midway Group is overlain successively by the Wilcox Group, Carrizo Sand, Reklaw Formation, Queen City Sand, Weches Formation, and Sparta Sand.  The Reklaw and Weches have extremely poor water-bearing qualities and are insignificant as aquifers in Rusk County.  Sparta and Queen City sediments are preserved on downdropped blocks of the Mt. Enterprise Fault System and on higher elevations in northern Rusk County.  However, the limited areal extent of the Sparta and Queen City restricts their use as a water supply to low-yield, shallow wells. 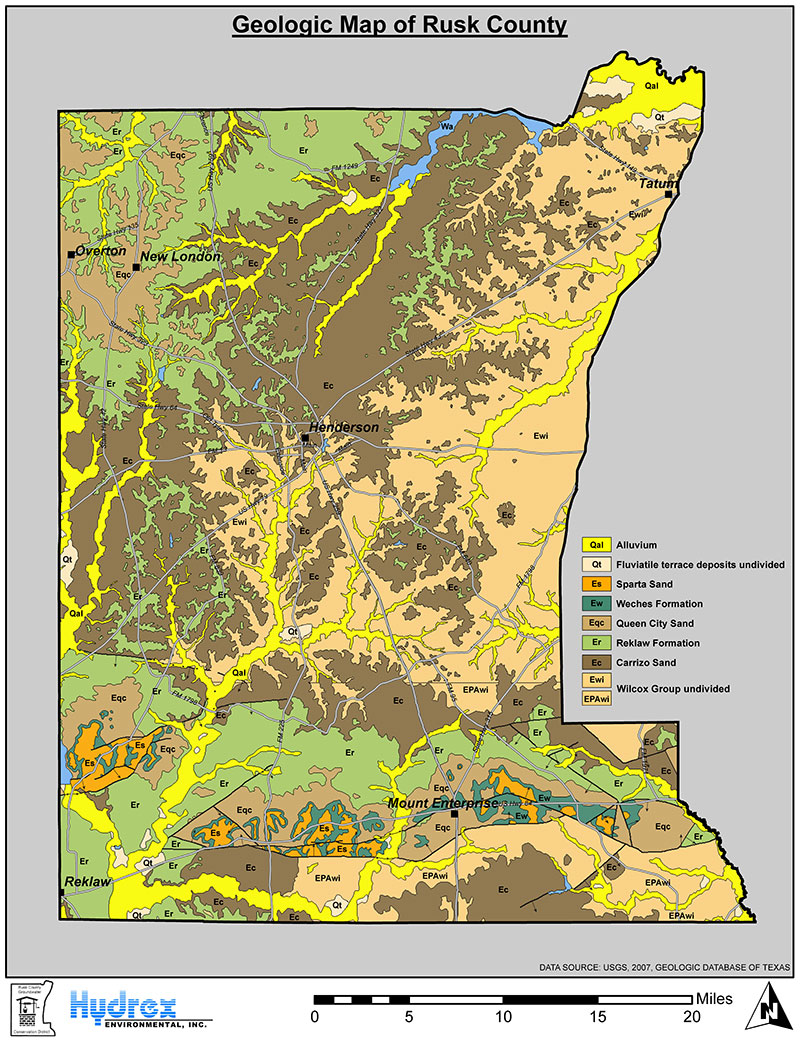 The top of the Midway Group of Paleocene age marks the base of the extent of fresh groundwater in Rusk County.  The Midway group is overlain successively by the Wilcox Group, Carrizo Sand, Reklaw Formation, Queen City Sand, Weches Formation, and Sparta Sand.

In Central Texas, the Wilcox Group of Paleocene to Eocene age, is subdivided into the Hooper, Simsboro, and Calvert Bluff formations, corresponding to deltaic, fluvial, and fluvial-deltaic facies, respectively.  However, in East Texas, the Simsboro is no longer identifiable and the Wilcox Group is divided into informal lower and upper units.  The lower Wilcox represents the facies equivalent of the Hooper Formation and the upper Wilcox includes both the Simsboro and the Calvert Bluff equivalent fluvial and fluvial-deltaic facies, respectively.

In East Texas and Rusk County, the Wilcox Group consists of beds of sand, silt, and clay, with locally economic amounts of lignite.  These Wilcox Group sediments represent multi-facies, fluvial-deltaic systems where channels and associated sand facies form the framework for groundwater movement.  The sand bodies are elongated, sinuous, and laterally discontinuous with axes generally oriented north to south consistent with the direction of sediment transport.  The elongate sand bodies represent ancient fluvial systems and offer optimal locations for high yield water wells.  In western Rusk County, the Wilcox reaches a maximum thickness of approximately 1500 feet.  The unit thins toward the uplift and is reduced to slightly over 600 feet thick in its outcrop in the eastern portion of the county.

The Carrizo Sand is a massive, relatively homogenous sand of Eocene age consisting of medium- to fine-grain quartz sand with minor occurrences of interbedded gray clay.  The Carrizo Sand is a clastic, near shore deposit with beach, dune, barrier island, and lagoonal facies represented in outcrops throughout East Texas.  In Rusk County, where not thinned or entirely removed by erosion, the formation can reach a thickness of over 125 feet.

The Reklaw Formation of Eocene age is a shallow marine shelf deposit that is primarily composed of glauconitic clay and silt.  In some locales, the formation commonly contains minor amounts of sand in the basal portion of the formation, near its contact with the underlying Carrizo Sand.  In outcrop, the Reklaw forms a red clay soil that typically contains limonite seams and iron concretions.  In Rusk County, the Reklaw Formation reaches a maximum thickness of approximately 130 feet and occurs primarily in the northern portion of the county and north of the Mt. Enterprise Fault System in the southern portion of the county.

The Queen City Sand of Eocene age was deposited by an extensive deltaic system and is primarily composed of sand, loosely cemented sandstone, and interbedded clay units with minor occurrences of lignite.  In East Texas, sand facies of the Queen City Sand are thickest near the center of the East Texas Basin and generally thin eastward along the strike of the formation, pinching out in the subsurface just west of the Texas-Louisiana border.  In Rusk County, the Queen City Sand occurs in outcrop and subcrop in the northwestern portion of the county and also in the Mount Enterprise Fault System in the southern portion of the county. The formation ranges in thickness up to 130 feet.

The Weches Formation of Eocene age is a shallow marine shelf deposit that is primarily composed of glauconitic clay with only minor amounts of sand.  The formation is green in unweathered sections but weathers to red when exposed.  Relatively thin sections of the Weches Formation occur in the Mt. Enterprise Fault System in southern Rusk County where it attains a maximum thickness of approximately 50 feet.

The Sparta Sand of Eocene age consists of fine sand and interbedded sandy clay and silt deposited in a deltaic environment similar to the Queen City Sand.  In Rusk County, the Sparta Sand only exists as laterally discontinuous units within the Mt. Enterprise Fault System where it attains maximum thicknesses of about 100 feet. 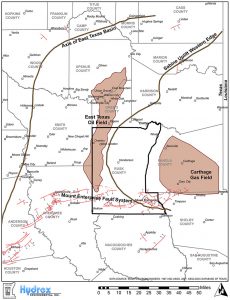 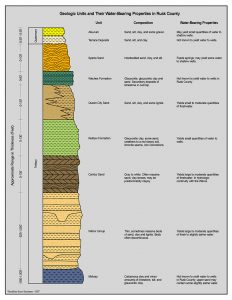 Although considerably less important in Rusk County than the Carrizo-Wilcox aquifer, the Queen City minor aquifer is an important local source of groundwater primarily in its outcrop in the northwestern portion of Rusk County and in the Mt. Enterprise Fault System in the southwestern portion of the county.  The Queen City aquifer’s limited extent and shallow occurrence in Rusk County make it a target for primarily low-yield production.  In addition, its generally poorer water quality than the Carrizo-Wilcox aquifer make it a less desirable target for production and use as a primary drinking water source in Rusk County. 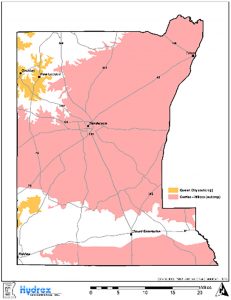 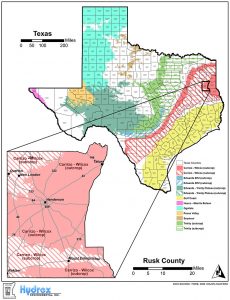